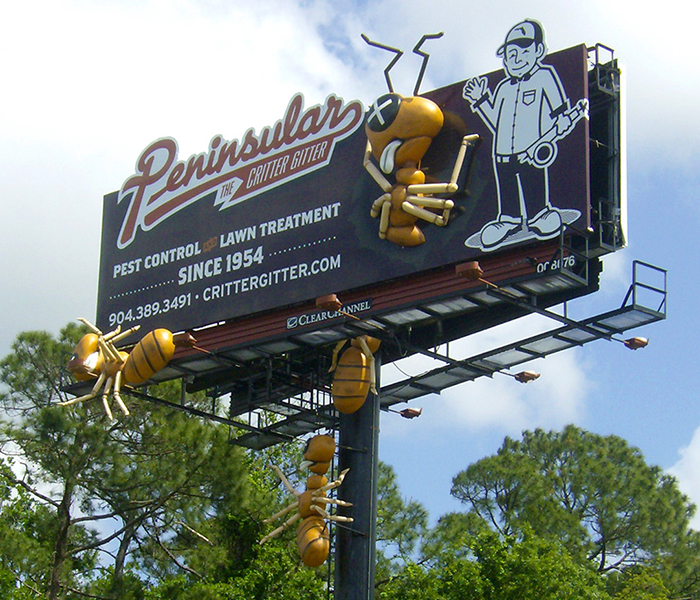 We are a traditional advertising medium.
Along with other primary media like newspapers, radio and television, we offer advertising opportunities for commercial and noncommercial messages.
We are an economically important medium to the local communities we serve.
More than two thousand billboard companies nationwide meet the demand for outdoor advertising services and infuse more than a billion dollars into local economies.
We are a controlled medium.
We are subject to extensive regulation at the local, state, and federal levels.
We are a responsible medium.
We have a 100-year history providing important public service announcements to communities all across America. Thousands of organizations count on us each year.
We are an entertaining medium.
We challenge the creativity of advertisers with conditions of simplicity. We provide the most public forum for imagination available.
We are a useful medium.
We provide needed information to motorists and we help customers make decisions. We are an integral part of the information community.
We are an effective advertising medium.
We provide an accessible, cost-efficient and highly effective communication vehicle for business, small and large, to convey information about their products and services.

In 1835 Jared Bell printed 9x6 posters advertising the circus and theatre, outdoor advertising’s first clients. In 1846 Richard Hoe developed a better press called the Napier Cylinder that printed larger sheets. This paved the way to billboards, as the size of the billboard was now only limited by the surface to which it was attached.

By 1867 advertisers had already begun leasing space on the sides of buildings and fences and Bradbury and Houghteling of New York initiated a nationwide painting and posting service for advertisers.

On July 15, 1891, the International Bill Posters’ Association, the affiliated state associations, and a growing number of manufacturers were ready for a strengthened national association. The groups met in Chicago and formed the Associated Bill Posters’ Association of the United States and Canada. Their purpose was “to promote a greater understanding of the poster medium, to provide and expanded nationwide organization for coordinating the services offered by member companies, and to continue to address the ethical concerns of the country and the possibilities that the poster in some future standardized form could act as an advertising medium for manufacturers.”
1900: Standardization of Billboards

By 1900 a major step towards the standardization of billboards occurred - a standardized structure was created to hold posters of three, eight, and sixteen sheets (each measuring 42 x 28”).

This structure allowed boards to become a recognizable part of city landscapes attracting advertisers like Palmolive, Kellogg and Coca-Cola.

1913-1921: A Responsible Industry
In 1913, the association established an education committee to serve a public relations role. Public service advertising became a common practice and was seen as a responsibility of the industry. Messages on the boards ranged from inspirational to social concerns - including Adolph Treidler’s war poster Have You Bought Your Bond? which made history as the first government-sponsored poster produced after the United States entered the war. It is estimated that the outdoor industry donated more than $1.5 million in advertising space to the cause of World War I.

Through the billboard industry’s involvement in WWI, it became obvious how persuasive the outdoor industry was.

In 1921 the Federal Highway Act brought the addition of newer and better roads, which led to billboards having more space to fill and more messages to send. Tire manufacturers, clothing, home appliances, and vacations spots all competed for the attention of drivers on the newly paved highways across America. Across the country, “loyalty posters” were erected promoting Boy Scouts of America, the Girl Scouts, church attendance, traffic safety, and other worthwhile messages.

Also in 1925 the first major merger of outdoor advertising firms occurred between the Fulton Group, a considerable number of modest-size companies, and the relatively large and well-known Thomas Cusack Company of Chicago. They combined to become the General Outdoor Advertising Company (GOA).

In 1934 the Traffic Audit Bureau was established to provide advertisers with the necessary data for determining the size of the audience viewing its billboards.

During the 40s, the race for billboard space was on. With the attack on Pearl Harbor and World War II in progress, the U.S. government needed a means to encourage participation in the war effort. In response, the industry created 17,000 poster panels for the use of the American Red Cross and its War Fund campaign. With this campaign, the Red Cross received the most complete coverage ever by the billboard industry.

By the end of 1943, the outdoor advertising industry had contributed nearly $22.5 million worth of posters to the education, publicity and recruitment of the war effort.

1950s - The trend of the cutout image extending above the billboard itself took the industry by storm. Many of these billboards have withstood the tests of time and are today structures that people recognize and associate with the cities that welcomed them years ago.

Also in the fifties, the “full bleed” board became popular. With no frame, this style allowed segmented boards.  Panels could be rotated from site to site in a city or region. This breakthrough not only permitted most boards to be painted in the studio, but the advertiser was also assured a wider viewing of any given campaign.

Late 1950s, a three-dimensional effect was popular. This look used various types of plastic materials to create one-of-a-kind designs that were popular through the end of the decade.

The 1960s began with billboards using much stock design and typography. Creativity was the buzzword of the sixties, and it was apparent on the nation’s outdoor advertising. Outdoor advertising utilized simplified designs, reduced text, and memorable humor to persuade its audience.

1965: Protection for the Industry

In 1965 the Highway Beautification Act was signed into law by President Johnson. Its purpose was to limit billboards to commercial and industrial areas in order to provide control on Interstate and Federal-Aid Primary highways.

It required states to set size, lighting and spacing standards and to date it still requires payment of just compensation for the removal of lawfully erected signs.

1960s - With young people not following in the footsteps of their parents and marrying young, the stereotypical portrayals of families no longer worked in ads. The young, single person was the new consumer that advertisers had to target.

During this time, billboards were especially used to introduce the new fast food, drive-thru window to the country. The Golden Arches, Colonel Sanders and Wendy’s were all introduced to the world through billboards.

The sixties were also a time that recording studios took advantage of the exposure of billboards. Larger cities boasted full-size photos of stars advertising movies and new releases.

In 1972, tobacco advertising was banned on broadcast media leaving print and outdoor as its most popular venues.

The 1970s offered billboards to a new group of advertisers. Health food, exercise facilities, weight-loss centers, insurance agencies, hospitals, and churches all began to include billboards in their advertising efforts. Fuel conservation and military recruitment again joined the public service side of outdoor advertising. During this time motorcycle advertising was also popular, with Harley-Davidson, Honda, Kawasaki, Yamaha and Suzuki all using the outdoor advertising medium.

The biggest change in billboards since their creation happened with technology. With the rise of computers in the 1970s, the practice of hand-painting billboards began its demise as computer-painted billboards become more prominent.

The 1980s brought "wordless" boards to the forefront, which were extremely successful for clients such as Nike, McDonalds and Honda. Automobiles began to show up on billboards everywhere with manufacturers introducing new models of cars to the country.

This decade brought the use of advertising on buses, trains, cars, etc. to the forefront of outdoor advertising.

In 1990, revenue from the outdoor advertising industry was nearly $1.5 billion and billboard companies were annually donating more than $140 million in free space to charitable organizations.

In 1999, tobacco advertising was banned from billboards.

2000 to the Present: Out of Home Advertising and Digital Technology

In the early 2000’s, the continued growth of outdoor advertising beyond the traditional billboard resulted in the development of the term “out of home” (OOH) advertising. This new classification breaks down out of home advertising into four major categories: Billboards, Street Furniture, Transit and Alternative Outdoor. Out of Home advertising is made up of more than 100 different formats, totaling $6.99 billion in annual revenues in 2008 in the USA.

In 2002, Arbitron began developing an out of home advertising ratings system to provide industry audience data comparable to the kind used by other media.

In 2005, the first digital billboards were installed. Digital technology provides for more flexibility than traditional billboards. Advertisers have the ability to change ad messages quickly and efficiently to display real-time information. Digital boards can also allow for an interactive element using social media such as Twitter.

In 2010, the Traffic Audit Bureau (TAB) launched OOH Ratings, a rating system comparable to those used by other media. Outdoor ratings had traditionally been measured using traffic counts and daily effective circulation in order to estimate reach. This outdoor measuring system did not provide a seamless integration and comparison with broadcast and print media. The new TAB Out of Home Ratings system is the new measurement standard in out-of-home and takes the focus from the number of consumers that could see an advertisement and converts that figure to a more realistic one of the number of consumers who actually noticed it and allows for easy integration in multi-media planning.

The OOH industry continues to develop new technologies and formats that include interactive elements using mobile and social applications such as Facebook and Twitter feeds. The industry continues to transform the way it does business to remain in step with where advertising and the consumer are headed.

Bulletins
A Bulletin is the largest standard-sized billboard that delivers maximum exposure to vehicular traffic on expressways, highways and primary arteries. Typically up to 14 feet high and 48 feet wide, a bulletin provides a large amount of space for your message.
Poster Panels
Posters are billboards that are smaller than bulletins. These smaller panels are can be placed in more locations and offer a more efficient way to target a specific audience with your message.
Transit Shelters
Bus shelters, train/tram stations or taxi stands can be used to convey your message to locals and tourists alike.
Mall Posters
Kiosks and posters set at shopping centers and malls. Allows businesses to promote current specials or target consumers with specific messages.